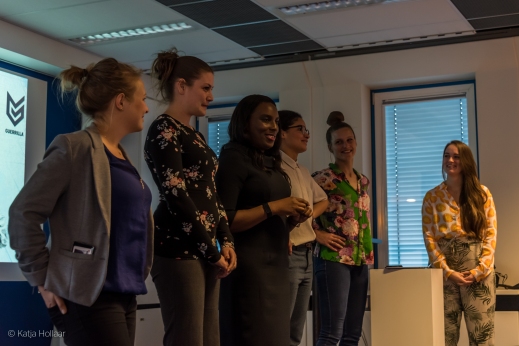 Your grandma asking: “Say whut?! You are a software developer? Isn’t that something for guys?” Or a stakeholder (albeit pleasantly) surprised you are the developer of the team. It’s what you (sometimes positively, sometimes neutrally, sometimes even negatively) deal with in a job, we of course perceive as not dependent on a gender, but what some people or even society still often perceives as a men’s job.

We as developers aren’t alone in these experiences. What about pilots, surgeons, firefighters (in Dutch the most used word even is: brandweermannen, firefightmen), garbage men, car mechanics, CEOs, entrepeneurs etc.? (Laughing out loud when typing these, ’cause why would any of these jobs be a men’s job in the first place?)

So I thought it would be a fun outing to hear from other women in (wo)men jobs about their jobs. Have a little career day. I mean, we love to learn new things: so who knows when we want to switch careers again…. (Please don’t! We need you in this particular gendergap, ha!)

After a short intro about Girl Code, Eva Marie Beij (CEO Wegenwacht – Roadside Assistance) and Jennifer Ingenbleck (working ANWB’s most iconic job: roadside assistant) kicked the night off, Anouk Mentink talked about the challenges she faced becoming a firefighter and about the rewards her job brings her. Then it was time for Kim Berkhuizen who started out as a beer brewer and went beyond getting her Masters in it and became a process technologist big shot at Heineken. We also had a speaker who just spoke at the UN and came all the way from America: Gloria Kimbwala who spoke in name of us Girl Coders about being a programmer (and founder of Shule) and the night was closed off by Yosine Delgado MSc. talking about her job as a doctor and her place at the surgery department.

Before we go to the recap of the night written by Girl Coder (at the ANWB) Sabine van der Eijk, I want to sincerely thank all of the speakers again (I heard you inspired many that night!), all attendees for making another Girl Code an absolute success and the ANWB and hosts (my colleagues) who helped me out with the organization and the night: Tissaine Marshall, Katja Hollaar, Zhen Hu, Debbie Mijnsbergen, Sabine van der Eijk and Hanny Verkerk!

Photo’s by Katja of the event can be found here.

Next Girl Code will be all about ‘Game Development’ at Guerrilla Games. If you want to make a chance(!) on a spot don’t think twice and claim a spot on the waitlist!

Being a woman in a mainly male dominated working fields 🙋🏻‍♀️

Latest Girl Code Career Meetup at ANWB (Dutch Roadside Assistance Association) was all about speaker’s experiences being a woman in a mainly male dominated working fields. The talks referred to life changing moments and choosing to work in the expertise field you prefer. The speakers worked in various disciplines: a beer brewer, a surgeon, a roadside assistance guard, a CEO, a firefighter and a programmer. They all told their own stories about switching careers several times to finally land in a job they love. Some speakers followed their dreams, that were clear goals from their childhood they wanted to achieve.

I really admired the speakers who are working as a firefighter, beer supplier and roadside assistance guard. These jobs include heavy lifting, and I would say are physically challenging day in day out. They were, rightfully, proud in being not that different from their male colleagues. But also they explained that when there’s a moment you can’t keep up with the heavy physical part of that job it’s time to move on. Beer supplier Kim Berkhuizen switched to being a Beer processing technologist, after getting a beer brewing degree in Schotland. This job is still in line with her passion for beer and is less physical labor than carrying beer barrels around!

I took home that it’s important to follow your passion because that’s probably what you’re best in. Pursuing that goal, doing what you like to do, makes that there’s a place for you. I belief that if you honestly feel that what you’re doing now excites you, you’ll do a more than ok job! This is what will surprise everyone working with you in the field. And that’s not just caused by you being the only woman there. It’s that you’re making a difference in living your dream and you’ll feel happy doing that day in day out. That spirit of joy is very contagious for fellow workers around you.

This meetup evening there were absolutely some mentions on differences between men and women on the job. There was a personal story on how male-colleagues can’t resist to making comments to women working on the same level as them. Fun thing was that it was mentioned as it is, a man making a distinction. The speaker was already far past him on many levels at that point. Sharing anecdotes like these help giving everyone a better understanding and giving situations like these the amount of attention they deserve. Just let it exist but don’t take it home ;-)

I believe that the takeaway message was for you to believe in whatever you want to achieve. We had a lovely evening, with good foods arranged but the ANWB: noodles and sushi after the talks. Experiences were exchanged between women from various professions. Among the Girl Code speakers there were a Firefighter, a Brewer, a Surgeon, a Software Engineer, a CEO and our finest: A Roadside Assistance caregiver. Thank you for sharing your experience!

Starting at University I, instead of admitting to have a serious case of infobesitas, decided to make this new media addiction my life by studying it and making it part of my job.

But, at the end of 2016 after all the academic theory, writing, blogging and working in PR, I decided to take the leap and code! From December 2016 I can call myself a Full-Stack JavaScript developer.

This website holds my portfolio of the blogposts I wrote for university, my first job at Merge Media, Q42 and Girl Code. The blogposts are in the language they were originally written in. So, either Dutch or English.

My Github
My projects
Girl Code